My Wonderful Readers, today we follow the enlightening ripples of a special recollection…. 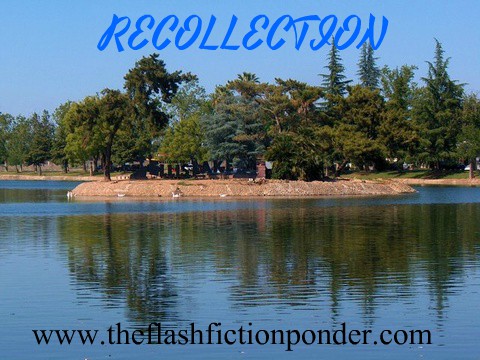 At least once a week I make it a point to head out to my local lake to rejuvenate. Usually a weekday, late morning, as this is the time when I’m least likely to be disturbed, most people either at work or school.

First I step out to the bank of the lake and just take a couple of minutes to take in the scene, the water embracing me by the ankles as it welcomes me back. Although its body is quite large, I feel as though I can feel it all, its energy sending calm ripples through my own. Its energy—I should say their energy—because the totality of it expands to not only this liquid form, but the natural surroundings which reflect upon it as well. The trees, the birds, the sky, all part of this force of completion that helps draw me here so often.

I wade in, the deeper I get the more it absorbs me, until I am entirely submerged, at which time I clear all thoughts, letting the world go and becoming one with the here and now.

I then lay back, allowing my body to rise to the surface, eyes closed, air filling my lungs, as I float on my back within nature’s gentle cradle.

From here my mind enters a state of free response, laying focus on whatever might come to it. At times it is nothing, remaining in the here and now, but not always. There might be instances of pondering, clarification, appreciation. The soul has a way of letting the mind know in what direction it should head.

Appreciation. A route I often find myself taking. And none more so than with the recollection of Rumiko…

She was the first true enigma I ever experienced in this life. A Buddhist nun from Japan, wearing no hair, no make-up, only a simple robe. Indeed, she was a mystery to us all, walking through those auditorium doors with Principal Evans while carrying a small covered box, appearing not to have a care in the world as her appearance set off a hundred whispers throughout our eighth grade class.

Our two years of middle school included learning quite a bit about those who were part of the outside world. Interesting-looking people we might see in passing, leaving us to wonder as they blended in with our diverse society. Thanks to Principal Evans these mysterious strangers became engaging characters, our student body getting to know a new member of our community about once a month as they’d be invited to speak at one of our assemblies.

From a baker to a local news anchor, each new visitor left us with a little something special; a new perspective to look at the world through. But it was Rumiko, that Japanese Buddhist nun, who had had the deepest impact on me.

She had grown up in a family of ninjas, their history going back two thousand years. When the kids heard that word—envisioning a character dressed in all black kicking butt—they sent out a wave of laughter, their idea of what pop culture had imprinted in their minds not matching up to this small simple woman standing before them.

Responding to their ignorance, Principal Evans asked the nun if she would be so kind as to perform a demonstration on him. This immediately got everyone’s attention, as he was a giant standing next to her, towering in at about six and a half feet, her small frame of less than five feet making her look like a child.

But all fell silent when Principal Evans lunged for her, mesmerized as the nun not only evaded but counter-attacked, blowing out into thin air like a snowflake before coming back down like an avalanche. her body weight folding our principal from the back of his knees and redirecting that downward momentum of his into a whirl that sent him straight to the floor, where he caught himself with open palms.

Face down, he was like a redwood tree that had timbered over, the nun then playfully taking up a lotus position atop his back. We erupted in laughs, cheers, thunderous applause.

She now had our complete attention, using this opportunity to present what she had really come here to express. If her physical prowess was a snow storm, her next lesson was the universe above it.

Rumiko picked up her small covered box as she began to address us. “I would like to tell you a story, short in length but grand in scope.” From the box she withdrew a tiny turtle, no bigger than the palm of her hand. “It is a tale you may not have heard before, but one that has been told within the Buddhist community for several generations.

“Imagine if you will the wide open ocean, so vast that it is a world within itself. Now picture a small turtle like Kozo here, only the one I speak of is also blind. He lives on the ocean floor, rising to the surface only once every one hundred years.

“Now imagine a piece of driftwood with a small hole in it floating atop this water world throughout time. How many centuries would it take for the blind turtle and the piece of driftwood to cross paths? For that tiny turtle to pop up through that small hole and climb out onto the wood’s surface? A thousand years? A million?

“One need not be a mathematician to know such a feat would take eons. And yet it is more likely for a small blind turtle to achieve this than it is for us to become human.

“What are we then, you might ask, before we reach this privileged state of being? I will ask you once more to use your mind, this time to think of everything we share this world with. Every living thing. From plants to insects, animals to sea creatures. Countless sentient beings, all awaiting an opportunity to reach our level of understanding.

“You see, we Buddhists believe in reincarnation, that is, being reborn over and over again in many different forms. But it is only through the existence of being a human being that we are able to grasp the true gift it is to realize such. To have the consciousness, the mind to comprehend just how fortunate we are to have finally reached this level of presence.

“And so we use such attainment to study, to learn more about this priceless gift of life and awareness.”

Her message spoke to me. When this knowledge was going over the heads of the other kids, many of them not even trying to understand as they watched that tiny head poke out of that small shell in her hand, I felt as though I was waking. Recalling something I had known before. A feeling of reconnecting, even though I didn’t really understand why at the time.

This exposure to universal truth was like the water I needed for the seed that was already in me to start growing again, eventually leading me back to the teachings from those like Rumiko. I didn’t feel compelled to take the same path that these remarkably disciplined monks and nuns had chosen for themselves, but indeed I embraced the dharma, this enlightening perspective allowing me to grow into the fulfilled person I believe myself to be today.

Over the years I’ve come to realize that reflection can occur at any moment of any day, while doing anything within my daily life. But when it comes to my personal favorite setting, I am most peaceful when being the blind turtle, floating in the here and now.

You can show your support for The Flash Fiction Ponder with Likes, Shares, Positive Comments, and by Following the blog:)