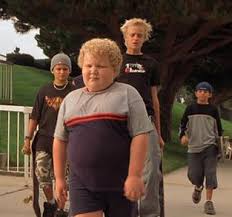 He felt like a human accordion, all the air being crushed out of him while his four bullies bounced atop him like a spring mattress. Every rib ached, every air sac in his lungs burned, but all he could do was take it, hoping they’d tire themselves out before he blacked out.

Butterball Billy, fat as all shit,

he eats it all away,

Why hadn’t he just listened to his mother, who had specifically told him not to go out that front door until it was time to leave? Dressed in his best suit and tie for the reading of his Uncle Jon’s will, he was supposed to have kept clean and pressed this Saturday morning, but he just couldn’t resist the urge to run down to the corner store for a few chocolate gold coins. Ok, maybe it wasn’t a run, more like a fast walk, but he had been sure he’d have enough time to fill his pocket full of candy before Ma was even half way done with her make-up. And as for his dad, college football kept him distracted.

Considered overweight for his thirteen-year-old growing body Billy wasn’t supposed to be anywhere near chocolate, but for him it was the greatest part of his day, the perfection of sweetness melting over his taste buds and soaking him in bliss.

But as he left the store savoring that first piece the awful soundtrack of his childhood dug into his ears. He tried to ignore it, as if he hadn’t heard a thing, but this tactic never really worked, shuffling sneakers closing in for what would undoubtedly be a painful torment.

“Hey Butterball, why you all dressed up? It ain’t Sunaday.”

“Buddha’s not a-” was all Billy could get out before being punched in the gut, the four bullies quickly pushing him around to the back alley.

And now here he was, chubby cheek to pavement, fighting hard to stay conscious as they jumped atop him like a bouncy house. .

Billy just laid there for a minute, taking in the air his body so desperately needed, assessing through pain where it hurt the most. A process he was all too familiar with.

“…not a god. Buddha’s not a god, he was a prince,” he said aloud, completing the sentence he had been prevented from finishing.

He thought of asking to use the store’s bathroom to clean up, but after looking down at his torn blackened clothes with empty pocket robbed of its chocolate he realized it wouldn’t help, and so he just wobbled his way to his feet and made his way home.

“And lastly, but definitely not beastly, I leave to my beloved nephew, Billy Thornton, a lifetime of laughter, my treasured Laff Box.”

And with this proclamation the attorney was finished with the reading of the will.

“What’s a laugh box?” Billy wondered aloud before being hushed by his mother.

The next day Billy found the answer to his question waiting for him in the garage.

Frankenstein typewriter was the first thought that came to his mind. It was a clunky box, nearly half as tall as he was, chunky button keys attached to metal veins.

With one of his thick little fingers Billy reached out and pushed one of the round keys. The box let out a barrel of laughs, the kind you hear from one of those sitcoms.

He pushed another. This one was accompanied by applause. Then another… And another… All sounds of a joyful audience, yet each unique in its own reaction.

Billy smiled. Something his face wasn’t really used to doing these days. He pictured his Uncle Jon, the one who had always been the jokester in the family. The one who could always get a chuckle out of Billy no matter how bad things seemed.

The inheritance now made perfect sense. Well, not quite perfect. Not yet, anyway.

For the next few days Billy was completely consumed by his new Laff Box. He had learned a lot about it online, including the fact that it had been invented by a guy named Charley over a half century ago as a way to edit in perfect laughs for sitcoms. What he couldn’t figure out was how his Uncle Jun had come upon it, along with wondering if this is what helped make him into the jokester he was known to be.

Despite the new joy in his life Billy still had to deal with the reality of his school life, which of course was still dominated by physical and mental abuse. But he was beginning to recognize something odd starting to take shape within him. During the social humiliations his inner thoughts would turn to the laughter, and when physical pain brought about tears he would get the giggles. The bullies didn’t know what to make of it, but when they saw that an increase in their violence only produced more hysterics, they didn’t feel that entertained anymore.

Then Friday came, the day of Show-and-Tell…

In his research Billy had discovered a great deal of knowledge about his Laff Box, the fact that fascinated him the most being that although the hardware had changed over time, it was the laughs themselves that were timeless, for no one ever changed ol’ Charley’s original recordings. This meant that the sitcoms of the present were being laughed at by the audiences of the past, now obviously deceased and who knew where. What if at least a part of them still remained in that box, the laughter of the dead reaching out from beyond?

Billy liked the thought of that.

Draped in a sheet his box of ghosts were heavy, but at least there were wheels on the bottom, everyone staring as he pushed it into the classroom.

“Butterball robbed the cafeteria again,” went one snide remark, followed by, “it’s his food truck,” and, “Nah, it’s a mini frig. He needs it like life support!”

Hushed by their teacher, Billy’s classmates settled their crackles and gave him their full attention.

“Under this sheet is a box that has the same sounds as the box in your living rooms. The audience reactions you hear on your favorite TV shows are mixed with the laughs of dead people! How? Because they were recorded over a half century ago! And played on this…!”

Like a magician playing to his audience Billy yanked the sheet off his Laff Box.

“Live audiences didn’t always give the right reactions,” Billy went on to explain, “so a guy named Charley Douglass created this Laff Box.”

“How does it work?” someone asked.

Billy pushed one of the buttons, laughter filling the air.

The kids were dumbfounded.

This time he hit the key that included applause. They had never seen anything like it in their lives, commenting to each other while staring with mesmerized eyes.

Then came the inevitable…

“They’re laughing because you’re so fat!” ridiculed one of the bullies, saying it right before Billy’s finger pushed the next key. The class couldn’t help but laugh along.

“Welcome to McButterball, can I take your order?

“Yeah, I’ll take an extra-large butter, with a side order of butter!”

The insults kept coming, the timing so perfect that it was like Billy was catering to every one of them, with him even beginning to laugh too.

After a while the bullies ran out of things to say, but Billy continued to produce laughs, his own growing more and more deranged.

Not even the teacher knew how to respond.

One of the bullies began to heave. At first it was mistaken for more laughter, but the more dramatic it became the more eyes shifted from Billy to the taunter, and when he started to cough up brown muck, that’s when those eyes began to widen with fear.

Gravy, with chunks of turkey meat expelled from the boy’s mouth, his three co-conspirators now experiencing the same uncontrollable vomiting, all while Billy and his box kept laughing.

Turkey bones drove his ghost audience wild, passing through the esophagus of each bully with grotesque difficulty before being spewed out over their fellow students. This sent them all running out of the classroom, and when it was clear that this was indeed an unnatural occurrence, when the muck started to pour out of the four boys’ noses and ears as well, the teacher got the hell out of there too.

Once the floor was covered in chunked gravy Billy’s hysteria finally began to die down, his chubby fingers slowly rising off the vengeful keys he had been feverishly striking.

He looked down to those who had had him looking up to them for so long, their now deceased bodies bone-thin, as if they had thrown up all that had made them human.

Then again, were they ever really human? For being such requires humanity.