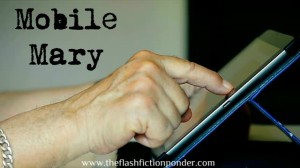 With the exception of the bus route and the clock tower along its way just about everything had changed over the three quarters of a century since Mary had first began riding the bus. People, places, things. Even the buses which drove this route down Main Street. Even the little girl who used to ride atop mommy’s lap with doll in hand and eyes occasionally catching glimpses of herself in the reflection of the large surrounding windows, nowadays these brief visions being more like gateways to contemplation, innocence no longer the one staring back at her, Mary now appearing more like an ancient granite statue then the embodiment of youth she once was.

Rarely would she see a being from her own time. Another old soul matching her exterior, the two giving a friendly nod of understanding that they were a part of a rare breed, a club becoming ever more exclusive with each passing day, with more and more of the remaining few passing away.

How many times had times changed for Mary on this bus route, each decade bringing with it a new so-called style, new attitudes, new ways to make old the old life of yesteryear more and more faded in one’s memory, one’s history.

She could remember when kids her age had mobile devices like paperback books and comics, entertainment on the go that could be tucked in a purse or pocket. Then came the Walkman, Discman, iPod, each it seemed on the heels of the other until everything settled into that rectangular finger slate of tablet and cell phone, this latest era bringing about such change in society that Mary had never seen the likes of in her lifetime, which was saying a lot given her ripe old age. And with it came the transformation of human interaction. Face-to-screen replacing face-to-face,, people now being dismissed by a simple click or tap of a delete button.

As a retired schoolteacher Mary couldn’t help but think of the implications this would have on the human race, not needing to have a background in Sociology to understand the ramifications associated with this cultural repositioning happening right before her eyes.

It was enough to bring her to the brink of giving up. To no longer go out into her community and enjoy it via bus rides, sidewalk strolling, even shopping at the grocery store, for everywhere she looked their eyes were staring down to those finger slates, caring less and less about true life happening around each and every one of them. Did they never catch a glimpse of their own reflection atop that glossy slab of plastic in their hand? Or was it willful ignorance? Choosing to ignore obsession and embrace false connection?

On the verge of depression all Mary could do was stare out the bus window and search for the few things which weathered the storm as she did. A tree here or there, the last couple of mom-and-pop stores, the clock tower…

All yes, that clock tower. How she would often reminisce of the times her and mommy would make it part of their daily outing. How mommy would tell her stories of its history, which would oftentimes unfold into even more tales of intrigue, including the one of how Einstein had his breakthrough moment with his theory of relativity the year mommy was born. Of how it involved a clock tower on the other side of the world, the physicist having a eureka moment when contemplating a streetcar beaming off in a speed of light while that clock tower at its back continued to tick-tock.

“Time can beat at different rates throughout the universe, depending on how fast you move.”

Mary had thought back on this moment of Einstein’s enlightenment countless times throughout the years, decades, but it was only during this lowest state of sulking when she was about to give up all hope that she had a eureka moment of her own.

Being the teacher, the educator, the seed of inspiration she had been to so many young people she had turned her gaze from the clock tower outside the bus window to the youth surrounding her in the here and now and those modern devices they all stared down upon.

It had been this moment a few years back when she had decided she would bring about change right under their eyes. Story had stood the test of time for thousands of years, and so she would use it to grab hold of their short attention spans at a level they could understand. With a little research Mary was well on her way to learning this new language known as Internet, educating herself on everything from SEO to organic traffic, social media to the abbreviated lingo of the day.

And now here she was, from granite to marble, still taking the bus, still walking amongst a sea of cell phone enthusiasts, only now many of them were staring down at what she had to say. Having no idea that she was the Mary behind Mobile Mary, her blog of flash fiction read in over one hundred countries by millions upon millions of readers, each unknowingly being educated on the substance of her past, seamlessly interwoven with the relevance of today through stories short enough to keep their attention while meaningful enough to plant new seeds in their developing gardens of the mind.

With movements slower and caution stronger she did not know how much time she had left, but time is relative is it not? And with what remaining tick-tocks she did have left her seeds of inspiration were continuing to be sown, her pebbles of flash fiction rippling throughout cyberspace and time ensuring perpetual growth long after her physical expiration.

And with this profound change Mary was no longer bothered by such finger slates.